As I mention in my "about me" section, I have been reading the climate change literature since the early 1990's. In doing so I have developed my personal views on the topic that are loosely defined as those of a "lukewarmer". It has been pointed out to me that my definition may miss a large community of lukewarmers but that is the source material for a whole new post. Instead, having worked both in the academic sector and the private sector (for both communities so to speak) I would like to write today about the divide between the skeptical community (mostly made up of  engineers and non-academic scientists) and the warmists (primarily made up of academic scientists). I am deliberately not addressing activists for either side as their motivations are not cogent to this discussion. In this post I will consider whether cultural tendencies associated with efforts to avoid Type I versus Type II errors might be a consideration in this inability to communicate effectively.

For those of you who are not familiar with the language, science identifies two major potential types of errors (okay there are at least three types but I will not go that deep today). A Type I error, which represents a false positive, involves claiming that an observed hypothesis is correct, when in reality it is false. A Type II error, which represents a false negative, involves claiming that an observed hypothesis is incorrect when it is actually correct. In my opinion, the best visualization of the difference between the two is this graphic: (which I have seen in numerous locations and whose origin I have been unable to confirm although I believe it comes from the "Effect Size FAQ") 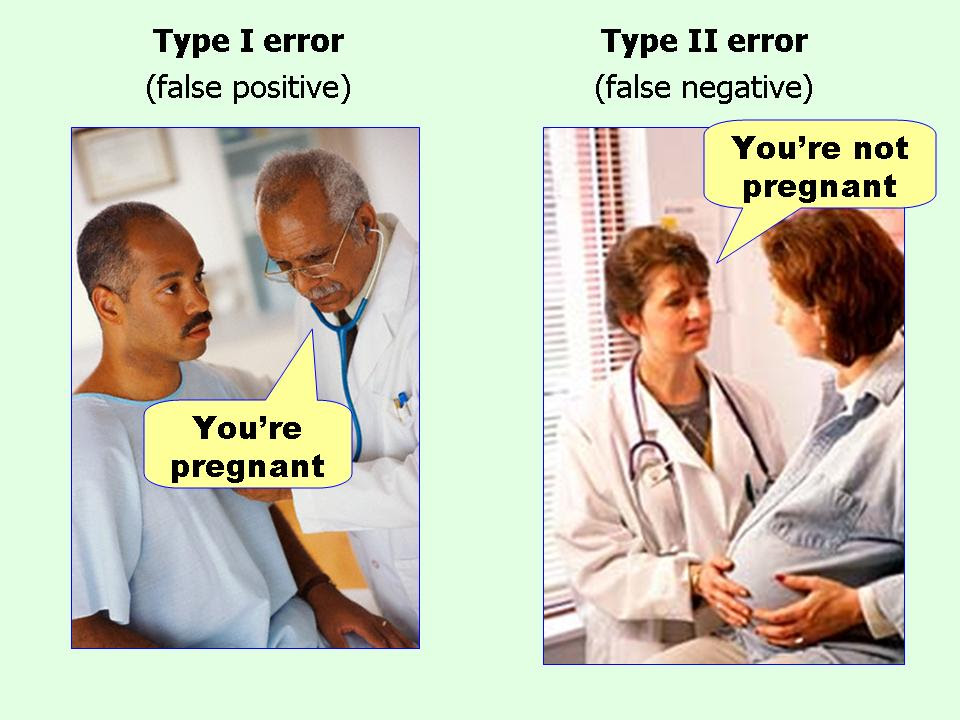 In the academic community a Type I error is a very big deal. Making an incorrect claim is the sort of thing that gets academics in very hot water. A Type I error leads to retractions of academic papers and a significant loss of prestige. As a consequence, the academic community has developed an extremely detailed process to avoid Type I errors involving confidence limits, acceptable p-values, peer review etc.. In the academic community a Type II error is by far less an important concern. Since science is theoretically a collegial affair (many colleagues are working on similar problems at the same time) all a Type II error represents is that you didn't identify the effect "this time" which means you still have another shot tomorrow, no mess no worry.

In the private sector, it is almost completely reversed. Consider my personal area of expertise "contaminated sites". If I am leading an investigation at a contaminated site and make a Type I error, all that means is that I have inferred the presence of contamination where it doesn't actually exist. The outcome of this error involves the need for further investigation to characterize and/or delineate the contamination. The further work will either confirm the contamination exists or provide further data to rule it out. This may entail some additional cost, and if wrong some minor loss of face, but it is not the sort of thing that gets one fired (if it is an isolated event). A false negative, on the other hand, is a much more serious issue as private sector scientists typically work in smaller groups with less cooperation within the wider community on individual project (there is limited oversight due to the the limited scopes of the problems and issues around sharing of proprietary information). Thus errors are less likely to be caught before the consequences become critical. Imagine telling a property owner that a property is clean when it isn't. The owner, acting on your advice, then sells the property to be developed for another use. If, in the course of the development, the contamination is found then the development stops. The new owner will need to clean the contamination and the costs associated with the clean-up and delays in the development (mortgage cost, permitting, subcontractor costs, etc..) will get passed on to your client. Lawsuits almost always ensue and someone (usually the consultant who missed the contamination) is going to pay a heavy cost. An even worse scenario happens if the contamination is not uncovered until after the development has been built because then human and ecological health could be put at risk. The term "Love Canal", or some similar local example, is burned in the memory of every environmental consultant early in their careers to avoid any repeats. The only effective ways to avoid Type II errors consists of either increasing your sampling data density or developing additional "process knowledge". Process knowledge in this case is an understanding of the sources of the contamination and the processes that govern the movement of the contaminants in the subsurface. Without detailed process knowledge (or a good conceptual site plan) an effective investigation plan cannot be accomplished.

So why is this difference important? Well as discussed, the vast majority of the warmist community have a worldview that stresses Type I error avoidance while most skeptics work in a community that stresses Type II error avoidance. Skeptics look at the global climate models and note that the models have a real difficulty in making accurate predictions. To explain, global climate models are complex computer programs filled with calculations based on science's best understanding of climate processes (geochemistry, global circulation patterns etc) with best guesses used to address holes in the knowledge base. The models are "trained" by looking at historical data and seeing whether they can replicate what has occurred in the past. In a simplistic description they are trained to interpolate data and once they get good enough at interpolating data they are then used to extrapolate future conditions. Since the global climate models are works in progress they still do not do a great job at extrapolating, yet. In particular, these models have failed to predict the "pause" in the surface temperature data that has lasted for (depending with whom you talk) somewhere around 15 - 18 years. Essentially the model predictions and the measured temperatures have diverged.

Skeptics see the poor extrapolations and suggest a need to refine the models to address the divergence. From a Type II error avoidance viewpoint, given the relatively poor quality of the model predictions, putting limited resources into addressing potentially faulty predictions seems like a poor choice. Instead, resources should be allocated to improving the models and any additional monies spent on other "demonstrably real" problems out in the world. Warmists, on the other hand, point out that the models are the best tools we have to date and to ignore their predictions, just because they are imperfect, is a big mistake. Warmists point out there is a real risk that a lack of action now could result in a low-probability, high-cost outcome (a fat tail on the uncertainty distribution of the outcomes). So monies should be spent on avoidance immediately while we continue to refine the models.

So where are we today? In 1990's parlance, skeptics are from Mars and warmists are from Venus. Like in the book, the two sides are not speaking to each other but rather are speaking past each other. Until the two communities can learn to speak each other's language and acknowledge the underlying differences, but ultimate validity, in both world views, we are not going to advance the discussion. The frustrating part, from someone who has worked on both sides of this intellectual chasm, is that neither side is "wrong". Each lives in a world where risk avoidance decisions are made and feel their approach is "right". We need to develop a "consensus" that acknowledges that both sides have legitimate concerns and that any acceptable compromise has to recognize the validity of differing points of view.
Posted by Blair at 4:03 PM

Blair
I am a resident of the Township of Langley, BC and have an Interdisciplinary PhD in Chemistry and Environmental Studies. Professionally, I am a Registered Professional Chemist and a Registered Professional Biologist and have been appointed to the Roster of Approved Professionals by the BC Ministry of Environment’s Director of Waste Management as a Standards Assessment Specialist (Contaminated Sites Approved Professional). My area of expertise is the investigation and remediation of contamination and the assessment of contamination on human and ecological health. I also serve as a technical specialist in areas including: industrial chemistry; sources, fate and transport, and biodegradation of chemical contaminants; effects of contaminants on natural systems; and ecosystem restoration. My graduate research was in the fields of Chemistry and Environmental Science and involved improving the availability of high-quality multidisciplinary scientific data for use in environmental decision-making. Coincidentally, one of my original research cases was an examination of the field of climate change. As such I have been reading the literature on climate change since the early 1990s.